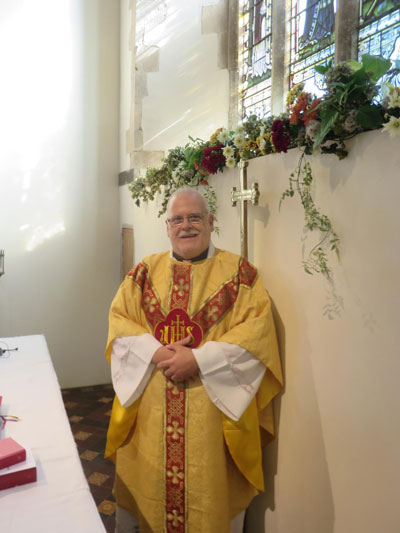 The former Director of Communications for the world-wide Anglican Communion is the Priest in Charge at St James, Merton, London. The Revd Canon Dr James M Rosenthal, founder of the St Nicholas Society UK/USA was parish priest at St Nicholas at Wade Thanet, Kent in the Diocese of Canterbury for over 4 years.

A native of Chicago, Father Jim is now a British subject and was ordained in the Diocese of London as deacon and priest. Among the churches served, in many capacities, are All Hallows by the Tower, St Marylebone, St Matthew Bayswater, and St Stephen Walbrook London. He was reader and Warden at St Matthews Westminster and Reader for several years at Canterbury Cathedral. He served in his post at the Anglican Consultative Council for 19 years.

On being appointed he said, “The moment I entered St James I felt at home. I believe Christ is calling me to this challenging post. I trust the ministry of all the baptised at St James will allow the warmth and power of the Anglican Catholic to flourish, welcoming more and more to come taste and see that the Lord is good.”

A musician, photographer and author, Fr Jim has a great ministry in allowing the true identity of St Nicholas to bring people to a better understanding of the truth of Christmas. He has even appeared in Southwark Cathedral several years ago as St Nicholas, the real one!

“To me,” Canon Rosenthal said, “The fellowship of the altar and with the saints are where we find the strength for deepening our call as disciples. The catholic tradition is alive and well and open to men, women, young and old, gay and straight, where all races flourish, as it leads us to Christ and not ourselves as the foundation of all that is good.”

He continued, “St James is so beautiful, what a privilege this will be for me to seek to bring more and more into the fellowship of such a place.” Merton is minutes from Wimbledon.

Dr Rosenthal is honorary canon in Lisbon, Madrid and Mpwapwa Tanzania. He is not a stranger to Southwark as he served as choirmaster at St Mary and St John the Divine Balham when he first arrived in the UK.